I shelved the elf...and learned a lesson or two

Last Friday morning, I posted something on Facebook that has caused quite a stir. After receiving dozens of comments, texts and phone calls about the post, I feel compelled to share the whole story. For those of you that didn't see it, here you go...

Carrie Lewis Creasy
Apparently the Elf on the Shelf didn't like what he saw around here and took a hike. Can't blame him! Instead of finding the elf this morning, the kids found a "Dear John" letter. Here's what it said...

I came to your house for some elf-ish Christmas fun.
But after just four days, my job here is done.

I’ve listened to you fight, whine and complain.
With your words and your fists, you cause each other such pain.

Rarely I heard a “please” or a “thank you”.
At the dinner table you wiggle, squirm and talk while you chew.

To your mom and your dad, you argue and talk back.
Good manners and respectfulness are two things you certainly lack!

Leaving is a hard, hard thing for this dedicated elf to do.
But, little ones, it’s time for you to learn a lesson or two.

Listen to your parents…every word that they say.
Your job is simple. It is just to obey!

And to one another…be kind, loving and nice.
Given the chance to share a toy or a hug, there’s no need to think twice.

Now don’t point fingers and blame! You’ve each done your part.
And chin up…maybe I’ll return when I’ve seen a change in your heart!

Before I get started, let me say clearly that this is about our family and my own convictions. It's not about what anyone else should or should not do...just us.

Last Thursday night out of utter frustration, I threw Bob Elfie...our Elf on the Shelf...in a drawer and penned that letter to our children. For five solid days, my children had fought and bickered and sassed me like never before. I was beat down and fed up. So I took action and, feeling very satisfied with myself, I thought "Ha! That'll teach them!"

Guess what happened when I read the letter to them? They fought and they whined and they complained and they screamed blame at one another. And me? I sat down at the kitchen table and cried in defeat. My plan had failed...miserably.

But in those tearful moments, God spoke Truth to my heart. The kind of truth that comforts and stings all at once. Truth that this mother desperately needed hear. This is what He said to me...


An elf will not make your children obey. And neither will his departure...no matter how clever. But training and discipline will. Do as I have commanded you.


But He didn't stop there. I had another lesson to learn, so He continued with this...


You have cluttered the manger. Why have you placed yet one more thing between your children and Jesus?

For months, I have been lazy...ignoring behavior that needed correction and neglecting precious opportunities to train my children in righteousness. And let me tell you...I was starting to see the consequences of my actions (or lack of, rather)!

So did I get it together and do what was right in order to correct the situation? No. Instead, I stood in front of my kids time after time, wagging my finger and reminding them that "the elf is watching" fully expecting them to become obedient, well-mannered, grateful little angels.

And God was right on about that whole cluttering the manger thing too. Here's why...


Since my return from Ethiopia in July, I have felt a strong conviction to clean out, to purge, to declutter my life of everything that comes between me and my Savior. Through tearful confession, I have surrendered spiritual junk. Through hard work, a garage sale and boxes upon boxes of donations, I have emptied our closets and cabinets of excess and waste. Although it wasn't easy...by Thanksgiving, our house was rid of so much "stuff" that had previously stolen our time and our  attention from Jesus.

But then while at Target one afternoon, I stopped at The Elf on the Shelf display. It was such a cute tradition for so many families, I thought we'd give it a try at our house. I picked it up to put it in my basket and felt for the first time a pause...something inside me that said "Don't do it. Put it back." But I ignored it and brought the elf home. On the first night, I propped him up on the mantel with the book beside him. Again, a pause. Again, I ignored it. The next morning, the kids discovered the little red elf and, after much discussion, gave him the name Bob Elfie.

For the next few evenings, I Googled elf ideas and creatively staged him. Each morning, the kids woke up on a mission to find him. 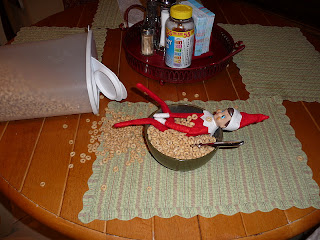 Throughout the day we talked and talked and talked about the elf. But there wasn't much talk about the virgin birth, the heavenly host of angels, the wise men or the precious gift of Jesus...from any of us. After months of making room for Jesus, I had indeed cluttered the manger. We were distracted...focusing on something of no significance and ignoring the true reason we celebrate Christmas.

Where is Bob Elfie today? Still in that drawer. Is he coming back? Probably not.

As cute and fun as he may be, I've learned that he's not the best thing for our family right now.

LOVE this post!!! I have been torn on my feelings on "the Elf" so I decided to hold off until I felt a strong conviction either way....thank you for sharing so honestly! It is SO easy to crowd the manger- and SO hard to go against the commercial ways- but it is awesome to see what happens to our family/kids when we do!!

So thankful you shared this Carrie! Have always loved that you are a transparent person and share so openly what God is teaching you and your family! This new mommy looks up to you as I'm sure many others do to! xoxo

Carrie
I am happily married to my best friend, Kyle, and blessed to be a stay-at-home mom to our three sweet (and super silly) kiddos. During the summer of 2010, we accepted God's call to adopt a child from Ethiopia! We're so excited. Join me here as I share our journey of faith, family and growing our family through the blessing of adoption!